Belgian MPs held a conference in solidarity with Iran’s nationwide uprising. This event was also attended by Mrs. Maryam Rajavi, the president-elect of the National Council of Resistance of Iran (NCRI), who delivered her remarks, via a video link as the event’s keynote speaker. Ms. Els Van Hoof, the chair of the Belgian parliament’s foreign affairs committee, presided over the event.

“The current situation in Iran is very sensitive. The regime has shown that it is capable of all crimes to remain in power. But in the face of the Iranian people’s courage, it has reached a dead end,” Mrs. Rajavi said.

“Women play a vanguard role because they have been the most oppressed by this misogynistic regime. It is an uprising against the religious dictatorship whose central pillar is misogyny,” Mrs. Rajavi said, referring to the Iranian women’s role in what many consider as Iran’s democratic revolution.

Highlighting the Iranian revolution’s democratic nature, the NCRI’s president-elect said: “No one should have any advantage or be discriminated against because of their religion or nationality. The people of Iran have risen up against all kinds of dictatorships. That is why people are shouting in the streets: ‘down with the oppressor, be it the shah or the mullahs.’”

Mrs. Rajavi urged Belgian lawmakers to urge their government to shut down the regime’s embassy, impose sanctions on Iran’s ruling theocracy, and designate the Revolutionary Guards (IRGC) and the regime’s Ministry of Intelligence and Security (MOIS).

It is worth noting that Iran’s diplomat-terrorist, Assadollah Assadi, was arrested and sentenced to life imprisonment in Belgium for attempting to bomb the NCRI’s annual “Free Iran” rally in France in 2018.

While condemning the regime’s violence, MP Van Hoof also underlined that Iranian people want to establish a democratic republic. She also applauded the courage of Iranian women, particularly women in the Iranian resistance, and their struggle for freedom and equality in the past four decades. 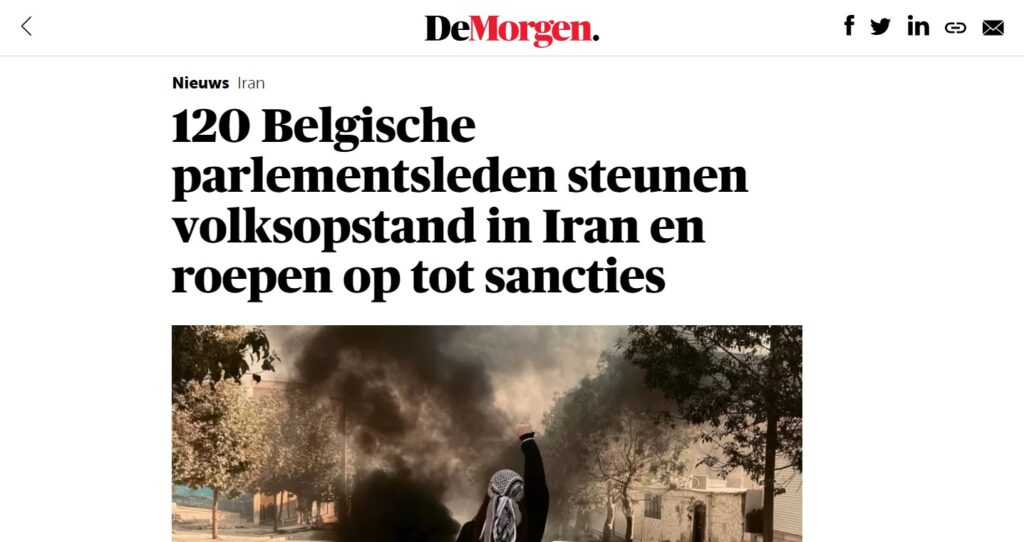 Ms. Van Hoof also referred to a resolution in the Belgian parliament, which was adopted on November 10, calling for the sanctioning of the IRGC and supporting the Iranian people. She announced that over 120 Belgian MPs had signed a letter in solidarity with the Iranian people’s uprising.

Senator Karin Brouwers was also among the conference’s speakers. “Dictators who kill their own population and even children cannot be tolerated. So we give you all the support in your opposition against this regime and hope your march to a revolution towards a democratic republic will succeed. I thank you,” she said while expressing support for the Iranian resistance movement.

MP Kathleen Depoorter underlined in her remarks that “we cannot accept nor deny the disruption of political rights and self-determination. It is not a coincidence that the opposition in Iran today is led by women, by you. And I truly support it.”

She also underlined that “the women’s struggle in Iran is today far beyond the issue of the hijab or the right to choose which dress they will wear. Rather, women must have the right to take part in political leadership, and they should be able to oppose the regime, as you mentioned.”

Senator Gaëtan Van Goidsenhoven was also among the speakers at Wednesday’s event. He stressed that European countries, particularly Belgium, should stand alongside the Iranian people today more than ever and make it clear that Iran’s repressive regime must end and be sanctioned more than before. He also admired the Iranian people’s struggle.

MP Marc-Jean Ghyssels also addressed the attendees, debunking all claims that Iran’s revolution is leaderless and unorganized. He emphasized that protesters and protests are organized and have their leaders. He cited independent experts as saying that the uprising’s organized structure has indeed rattled the regime’s foundations. He also stressed that it has been over four decades that the Iranian people are suffering from dictatorship both under the Shah and under the mullahs. He told Iranian people that there are millions of freedom-loving people like himself around the globe who support their revolution. MP Françoise Schepmans, who was also among the panelists, highlighted the bipartisan support of the current nationwide uprising among the Belgian lawmakers. She stressed that Belgium should maintain pressure on the Iranian regime, mainly by maintaining and increasing sanctions. She also admired the Iranian people’s heroic resistance against the ruling theocracy in the last four decades.